There has never been a Top 2000 listing for acoustic guitars, but these jumbo and OM models by Homestead most certainly would make it among the top performers.

Danny Vera, Top 2000 first place winning singer and guitar player, needs no introduction. But for some guitar players the Homestead brand might be an unknown quantity. The brand name derives from the town of Heemstede, The Netherlands, where Homestead guitars are designed in the minutest detail and the tonewood for the guitar tops is selected. Eventually, the instruments are being built in Bandung, West Java, Indonesia.

Homestead guitars can boast of a number of outstanding selling points. Firstly, you may personalize the guitars: determine the shape of the body, type of lacquer, hardware and decorations. However, the main point of importance is, in our opinion, what these guitars have in common: most outstanding quality. Granted, with a cost in excess of 2,000 euros these guitars are not cheap, but they may well stand comparison with much more expensive guitars by the classic brands. Homestead have been building personalized guitars before – for a.o. George Kooymans, lead guitar player of the famous Dutch “Golden Earring” band – and those unique specimens later on served as models for the different signature series guitars. At the end of 2020 the Danny Vera signature guitar was introduced, that had been built to the exact specifications of said singer-songwriter. A jumbo model, finished in nitro cellulose lacquer – according to Danny’s explicit wish. The letter “V” is omnipresent – fretboard, bridge, headstock. In particular, the bridge benefitted from this design feature as it came out rather special. An aesthetic improvement, in my humble opinion, on the upcurled-moustache-bridges that are being featured on the big Gibsons. The advantage of nitro cellulose lacquer lies in the fact that it affects the guitar’s sustain and resonance in a positive way. A disadvantage may be that it yellows, that spots that are prone to being touched get dull and that there is a short term tendency towards crackling. But then again: are those really disadvantages? As it is, it also makes for the guitar to age ‘well’.

By designing the jumbo model Gibson sought to counter the challenge Martin’s ‘Dreadnought’ posed. The dreadnought model has been copied by hundreds of luthiers and comparatively speaking jumbo shape sightings are few and far between. Because a jumbo (one of the biggest among acoustic guitars) tends to be a bit too bulky for some people’s tastes, Homestead also provide for an orchestra model, that is built according to the same specifications, and that features the body shape that is based on the classic Martin design. This OM is also directly recognizable as being different from the many similarly proportioned guitars that are being made. The guitars radiate individuality (the picture overleaf says more than a written text will do). They have this ‘flamboyant’ look, and the way the decorations are styled and interact makes for a stylistic unity that reminds one of art-deco styling days. For our test we could dispose of the jumbo as well as the orchestra model.
Specifications of both guitars are identical. There’s this Adirondack AAA-quality top (a hard type of spruce that originates from the eastern part of the US and Canada), ebony fretboard, neck crafted from one solid piece of mahogany, while Javanese rosewood makes up for the sides and back. As said, specs are identical so this offers a unique opportunity for the reviewer, to that effect that one may compare the way the body shape affects the tone without having to take other dissimilarities into account. However, there is hardly any noticeable difference: both guitars sound equally impressive. The jumbo sounds a bit louder, and makes for a ‘wider’ impression, so to speak, that sometimes resembles a piano. The OM has a lighter tone, with a tad more definition. Both guitars carry an LR Baggs VTC. When plugged in, while – of course – using an amp that is specially designed for acoustic guitar, the difference in sound characteristics is also distinctive. If I myself would play the guitars while using a microphone – or unplugged – I’d personally go for the jumbo. But then again, the difference in sound character as a matter of fact is negligible when the similarities are taken into account: an exceptionally beautiful, balanced sound.
Both guitars have been meticulously tuned and therefor a real treat to play. The ‘stiffness’ that characterizes some new guitars is totally absent, they resonate with a will. There’s an abundance of character in the tone, but the guitars sound sufficiently neutral to adapt to a wide variety of playing and music styles. In short: true masterpieces.

Danny’s involvement with the design has led to the most recognizable guitars that Homestead have been building to this day. For some people these guitars might be attractive because they – in a way – point to their idol. But most potential buyers will judge these guitars with regard to their specific qualities in the first place (or feel attracted to them because they think these are beautiful instruments). These signature models are so outstanding, that they will certainly make it to success on their own power. Even so, I sincerely hope Homestead may share in Danny Vera’s success. Those would be well-earned laurels indeed. 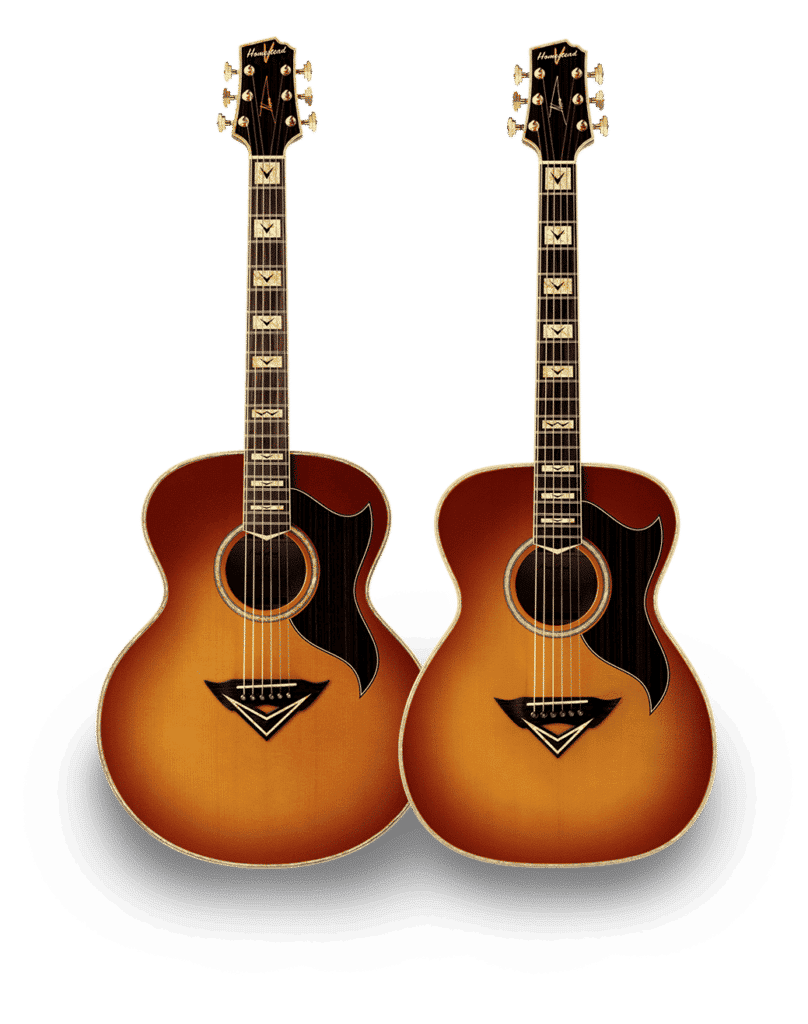