On Monday, October 29, the American singer/guitarist Tim Easton visited us to try out a few models. Eventually, he was very charmed by the “Slope Shoulder”. That is also the model he ordered.

Below he plays “Broken Hearted Man” on a Homestead Slope Shoulder from his album, “Paco & the Melodic Polaroids”

Easton was raised in Akron, Ohio, forming the band Kosher Spears while at college. He travelled abroad for a time, busking in London, Paris, Spain, Italy, Yugoslavia, Czechoslovakia, and Ireland.

On his return to the US in the mid-1990s, Easton joined the Haynes Boys with Freddie Free (guitar), Jovan Karcic (drums), and Aaron Rice (bass).

In 1996, they released their only album Haynes Boys (often referred to as Guardian Angel because of the cover illustration).

On June 23, 2015, Re-Vinyl Records reissued the album on vinyl with the originally intended cover art and updated liner notes.

The band kicked off a series of shows on June 25, 2015, in Columbus, Ohio, culminating with a June 28 show at the ComFest community festival in Columbus.

When the members of the Haynes Boys split to pursue individual projects, Easton recorded his 1998 debut album Special 20 on Heathen Records, a label launched by Easton and his manager Blake Squires.

He subsequently relocated to California and signed a deal with EMI Publishing and a record deal with New West Records. In 2001, he released The Truth About Us on which he was supported by Ken Coomer, John Sirratt, and Jay Bennett, all of Wilco.

Since 1966 was a primarily solo acoustic album released in 2011 and featuring 11 previously unreleased songs.

In 2013, Easton released Not Cool which he began recording after he moved back to Nashville and was inspired by a show at Robert’s Western World. He described the album as “kind of a 50′s, Sun Studio thing, kind of a rock and roll thing.”

The group released One For The Ditch, on Rebeltone Records, in 2008. Their second album Resolution Road was released in 2014. 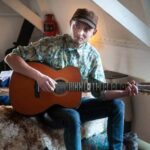