Which lacquer is best for a guitar?

Which lacquer is best for a guitar?

There are basically two types of lacquer when building guitars: Nitrocellulose (Nitro) and Polyurethane (Poly) or Polyester. Nitro was the standard lacquer for guitars until the 1970s. Polyurethane has become more and more common since the 1970s.

Opinions on the best paint vary widely among connoisseurs and luthiers. There are clearly proponents and opponents for the lacquers used. Below is an overview of the advantages and disadvantages.

Nitro is diluted, usually with acetone. Nitro is applied several times on top of each other. There is no need to sand in between. Only at the end is the guitar sanded and polished until it starts to shine nicely. Applying Nitro lacquer is more labour intensive and requires more coats than Poly. That is why Nitro is more expensive.

Because Nitro is thinner and more porous than Poly, many guitarists believe that Nitro allows the guitar to breathe better, creating a more open sound with longer sustain. At the same time, Nitro is much weaker, which means that damage can quickly occur, such as dents, cracks and scratches (photo). Nitro guitars also yellow faster and areas that you touch a lot become dull faster.

An additional disadvantage of Nitrocellulose is that it is worse for the environment and unsafe to work with. In the late 1960s, this was an important reason for many luthiers to switch to polyurethane. The use of Nitro is highly regulated and monitored in Western countries. 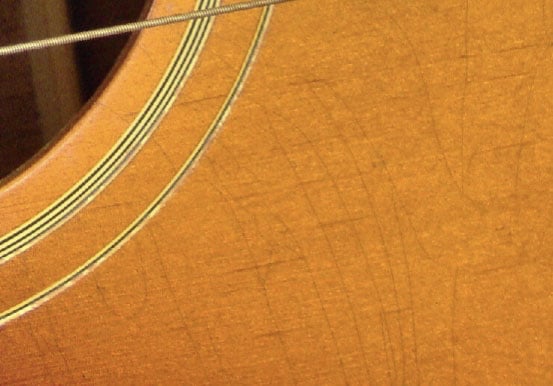 Polyurethane is a synthetic compound of two polymers. Poly has become the standard in guitar building since the 1970s, mainly because of the environment. The fact that Poly is easier to process and therefore cheaper has also played a role in the increasing popularity of this lacquer. Finally, Poly guitars look better and last much longer, often decades. However, the sound of Poly guitars is slightly more neutral than that of Nitro guitars.

While Nitrocellulose lacquer is more commonly used on premium guitars, that doesn’t mean Poly is of lower quality. Poly can be found on both cheap and high-end guitars.

Some guitar brands combine both types of lacquer, whereby the base layers are applied in Nitro and the top layers in Poly.

Choosing remains difficult and it is all very personal. In summary, it comes down to the following: if you go for a guitar that looks good for a long time and also has a good sound, then you go for Poly. If you go for the most pronounced sound and if you accept a faster aging of your guitar, then choose Nitro.

As mentioned before, Nitro’s price is more expensive than Poly, but that makes little difference to the overall guitar price.

Homestead builds its guitars in both Poly and Nitro, so we can meet the needs of every customer. Our advice: take a look at our webshop. There you can find our guitars in both lacquers. Or visit our studio “De Kluis” in Heemstede and try out both types of lacquer and judge for yourself.

Choose the shape of the body, tonewoods, hardware and decorations.

Order from our stock

We have most guitars in stock and you can try them out in our studio.

Order from our stock

Visit our showroom to try out different models and to discuss your wishes.