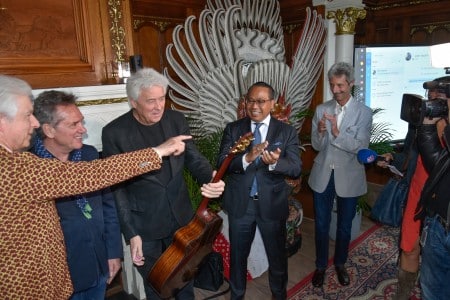 High-end custom made guitars from the city of Bandung, Indonesia, are entering Dutch and European market. The guitars are produced as a collaboration between a Dutch company, Homestead/Nehem International, and PT. Genta Trikarya from Bandung. The product was launched at the Embassy of the Republic of Indonesia in the Hague and presented by the Ambassador, I Gusti Agung Wesaka Puja, to legendary Dutch guitarist, George Kooymans. Mr. Kooijmans has been known as the member of the band, Golden Earring, in the 1960s and 70s. The Ambassador also presented the guitar to two other Dutch well-known musician: Henny Vriente which was known from the Band Doe Maar in 1980s and another musician Boudewijn de Groot,  in front of local Media, on 11 May 2017.

Ambassador Puja in his remarks commended the collaboration between Homestead and PT Genta Trikarya as a fine business example involving businesses from both countries. He added that the high quality guitars could further inform the public in the Netherlands about one of Indonesia’s high end finished products, such as the guitars which produced in Bandung. “I am confident that this collaboration will also enhance people-to-people relations through musical instruments as I believe that music is a universal language”, said Ambassador Puja.

After receiving the guitars, the trio who just created a new band called “Vreemde Kostgangers” tried the guitars and played some of their songs. “Mooie” the three of them said. The guitars were made specially for the trio to meet their tastes and characters.

Robin van de Poll from Homestead told the audience about the collaboration which was started in 2012. He read about the high quality guitars produced in Bandung in a famous magazine for guitars enthusiasts and decided to come to Bandung and visit the company. “At first, I was not thinking about collaborating with the company, but after awhile we and the whole team decided to collaborate in producing a high quality brand guitar for European market, and we started in the Netherlands”.

A representative for the Indonesian company, PT. Genta Trikarya, Mr. Awan Nasution, told the audience through video call, that the team in Bandung is proud to be able to produce the guitars for the trio musicians in the Netherlands.

Homestead Guitars products are made in Bandung based on fine Indonesian timbers such Javanese Rosewood, Javanese Mahogany dan Makassar Ebony. The products will be marketed not only in the Netherlands, but also to wider European Union market.

Embassy of Indonesia in The Hague, May 2017